Around the World in Six Train Routes

Retirement is a time for getting out there, seeing the world and satisfying your wanderlust. The only trouble, of course, is finding the energy to get it all done.

But don’t worry if your mountain-climbing days are behind you - train journeys afford a fuss-free way to explore exotic locales. To get you ready for your next adventure, we spoke to Monisha Rajesh, a British journalist whose writing has appeared in Time magazine, The New York Times, The Guardian and The Sunday Telegraph. She recently released the book Around the World in 80 Trains (Bloomsbury), which has garnered praise from the likes of Michael Palin, William Dalrymple and Irvine Welsh.

We asked her to share six of the world’s most spectacular train journeys. Here are her top picks, below.

1) The Mandovi Express from Mumbai to Madgaon (India) 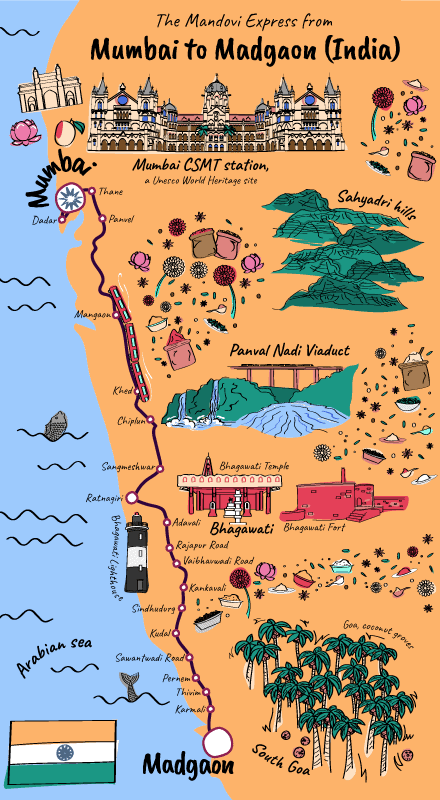 With its doors flung open and warm sea air billowing up the aisles, the Mandovi Express takes 14 hours to meander down the Konkan Coast. On one side, the Arabian sea twinkles; on the other you will spot the rolling Sahyadri hills.

Departing Mumbai Chhatrapati Shivaji Maharaj Terminus just after 7am, the train delves through the megacity, before emerging in countryside where children playing cricket and farmers herding goats are a common sight.

On the slow descent to Goa, coconut groves flank the train, palm trees cast shade and rivers flow beneath the wheels. Clattering across more than 2,000 bridges, including the highest viaduct in India, the Mandovi Express treats travellers to a smorgasbord of Indian delicacies, including fresh onion bhajis, crisp okra and sticky chicken lollipops.

Take advantage of the hawkers who clang up the aisles carrying clay pots of fragrant biryani and delicate cups of treacle-sweet tea.

Mumbai CSMT station, a UNESCO World Heritage site with a beautiful museum and walking tour; Ratnagiri, once the home of the exiled King Thibaw of Burma and now a popular stop for tourists owing to the 12th century Bhagawati fort and temple; Panval Nadi Viaduct, the highest viaduct in India – expect spectacular views as the train crosses the 400m-long bridge.

2) Travel in second or third class to fully appreciate the train’s gorgeous, sun-drenched views. First-class carriages are more comfortable, as they are air-conditioned, but they also have tinted windows. 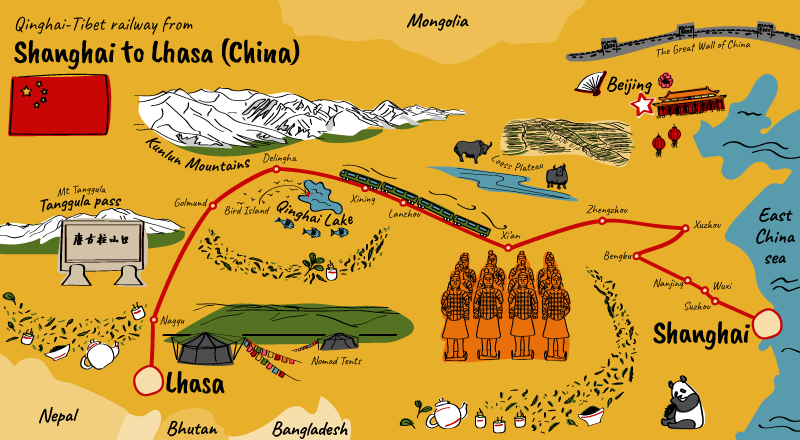 While few train journeys have the power to truly take your breath away, Qinghai-Tibet railway, the highest railway in the world, gives travellers plenty to gasp about.

Peaking at more than 5,000m above sea level, passengers should expect dizzying views and memorable photo-taking opportunities on this journey. Connecting Shanghai in mainland China to Lhasa in Tibet, this vertiginous railway runs through territory so treacherous it was once deemed an engineering impossibility.

Waking in the morning to the hiss of purified oxygen being pumped into the compartment, passengers pull up the blackout blind to find views resembling a Rothko painting: a slab of electric blue sky above a block of yellow plateau.

Lakes shimmer like molten metal and dreadlocked yaks graze up the hillsides. As the train ascends, the air grows thinner, dust gives way to ice and a blue glow from the Kunlun Mountains closes in around the carriages. On the descent to Lhasa, the terrain smooths out into slopes as soft as suede, with the odd nomad tent strung with prayer flags fluttering in the wind.

Xi’an, home of the Terracotta Warriors; the Qinghai Lake; the Tanggula Pass, the highest station in the world; the Kunlun Mountains; Lhasa.

1) Break up the journey by acclimatising in Xining for a couple of days. This should help to stave off the effects of any altitude sickness.

2) Stay hydrated: drinking plenty of water throughout the journey will help to increase your oxygen levels.

3) The Skeena Train from Jasper to Prince Rupert (Canada) 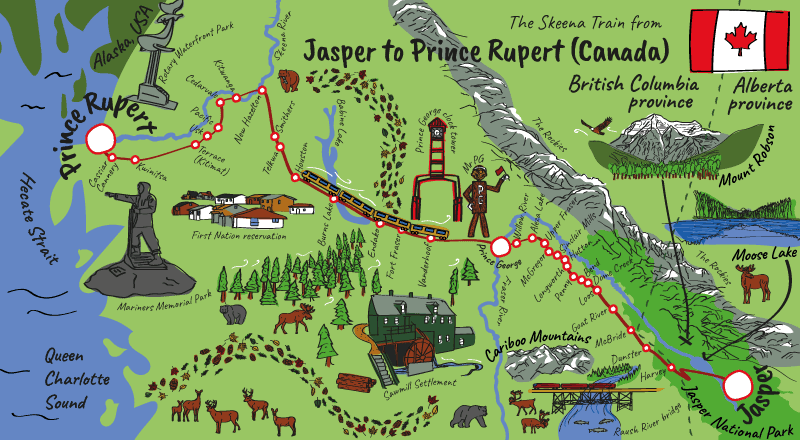 Lovingly known as “The Rupert Rocket”, the Skeena train (or Train Number Five – to give it its official name) travels from Jasper National Park in Alberta deep into the nooks and crannies of British Columbia.

Departing three days a week, the train takes two days to wind northwest, passing snow-capped Mount Robson – the highest peak in the Canadian Rockies – the Cariboo Mountains, and armies of Douglas fir marching down the hillsides.

Running along the edge of glass-like lakes filled with salmon, the train allows passengers to spot black and grizzly bears, white-tailed deer, elk, moose and bald eagles from inside the warmth and comfort of their panoramic dome car.

With an overnight stop in Prince George, the train runs through the region’s tiny stations (named Kwinitsa, Vanderhoof and Penny) and passes First Nations reservations and sawmill settlements before eventually arriving in the coastal town of Prince Rupert.

1) Travel between June and September when VIA Rail offers a premium service known as “touring class”. During this time, you can enjoy the comfort of a panoramic dome car with wine and meals served at your seat.

2) Book your overnight stays in Prince George and Prince Rupert well in advance - the train is extremely popular during summer.

4) The commuter train from Cannes to Ventimiglia (France/Italy) 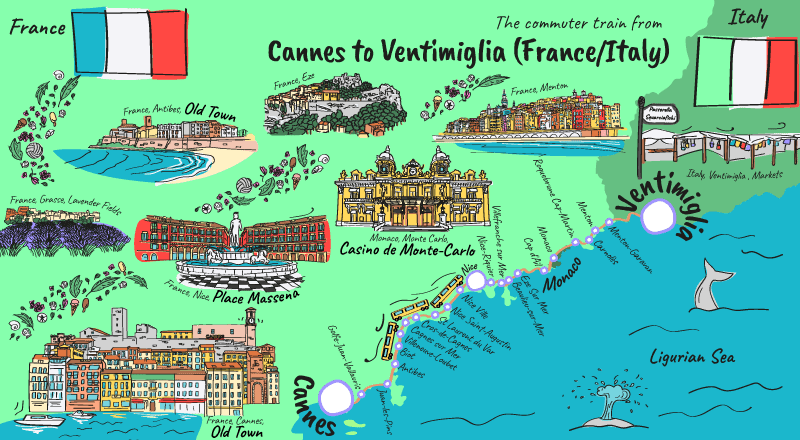 Usually crammed with high-school students, shoppers, and sandal-wearing grandpas armed with baguettes, this 90-minute commuter service runs along the French Riviera, connecting the palm-fringed resort of Cannes with the pastel-hued Italian market town of Ventimiglia.

Speeding along the edge of a sparkling Ligurian sea, the double-decker train indulges people-watchers; sunbathers, volleyball players and vendors selling ice cream and sweet-scented hot waffles are your entertainment here.

Stopping at stations where pink bougainvillea tumble down the walls, the train runs through Nice and Monaco before approaching rough hillsides and slowing into the old Italian station.

1) Sit on the top deck to get the best views of the ocean winking between apartment blocks.

2) Bring plenty of shopping bags; Ventimiglia is the perfect place to stock up on wholesale bottles of wine, pasta and dried saucisson.

5) The “Death Railway” from Bangkok to Nam Tok (Thailand) 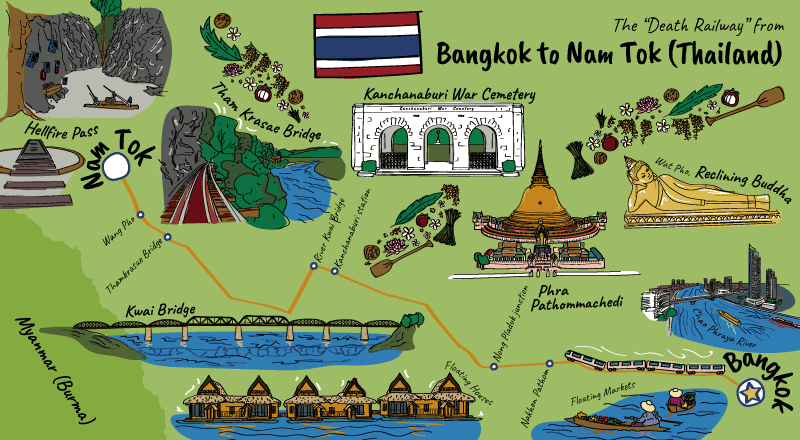 During the Second World War, the Japanese forced Allied prisoners of war to build a stretch of railway connecting Thailand to Burma with the hope of invading India. Stricken by diseases from cholera to dengue fever, the men built 257 miles of railway track in fourteen months, with one death for every sleeper laid. Known now as the “Death Railway”, this is a strikingly beautiful, if sobering, journey.

Departing twice a day, the train rattles west through jungle territory, brushing against monsoon-heavy branches that sweep through the windows and snap off, scattering twigs around the aisles.

Crossing the infamous bridge on the River Kwai, the train rumbles along old wooden trestles, passing tiny, brightly-coloured stations on its route. A hoot of its horn summons the train’s arrival as hawkers sell hot noodles, fishcakes and bottles of iced Nescafé on board.

Kanchanaburi, the main town in the area with hotels, restaurants and Allied war cemeteries; River Kwai Bridge that you can walk across; Tham Krasae Bridge; Wampo Viaduct; Hellfire Pass Memorial Museum – this isn’t on the train route, but is a half-hour taxi ride from Nam Tok. Here, visitors can wander around a small museum and walk along the tracks of the original Hellfire Pass while listening to testimonies from survivors. A must-visit.

1) You can’t book tickets online, but you can turn up on the day and hop on board to get access. However, if you’re someone who needs to plan ahead, there’s also a weekend tourist service that can be booked in advance at the station. For timings visit http://www.railway.co.th

2) Pack plenty of water and snacks for the journey in case of delays.

6) The Sunset Limited from New Orleans to Los Angeles (USA) 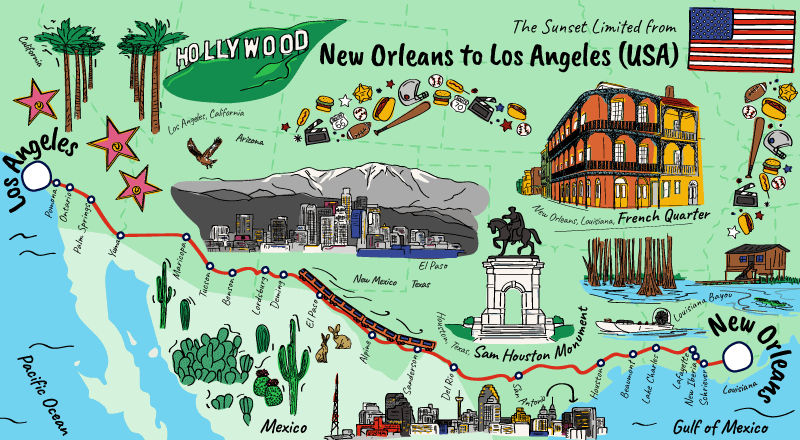 The oldest named train in America, the Sunset Limited takes just under two days to cross the Deep South from New Orleans to Los Angeles.

The panoramic viewing car offers the best seats on board, along with the perfect opportunity to meet a diverse slice of Uncle Sam’s society. Everyone, from teachers and musicians to Amish carpenters, railroaders, and runaways, board this American express.

Rolling past the bayous of Louisiana, the cacti of New Mexico and the deep red sunsets of Arizona, passengers have plenty of time to read, strum guitars or catch sight of jackrabbits racing by.

1) You will want to keep a few dollars close by for when the train rolls into El Paso station. Here, the famous Burrito Lady waits on the platform with freezer box in hand full of her fabulous chilli-beef burritos. Even the Amtrak staff join the enormous queue for this mouth-watering street food.

2) Pack a sleeping bag, or at least a blanket and pillow, if you aren’t travelling in a roomette. It can get chilly when the sun goes down.