Many of the myths and misconceptions regarding the equity release sector are now thankfully behind us as the industry has responded to consumer needs over the years.

That said, it is still commonly thought that equity release is only for the elderly or for those that have no other option when they want to raise extra money in later life.

At Equity Release Supermarket, we know these two perceptions are patently not true. We’re increasingly seeing people in their mid 60s turning to some form of later life lending (equity release or retirement mortgage) to meet a vast range of financial needs – from needing to carry their mortgage into retirement, to financially supporting their children or themselves.

As these common uses illustrate, equity release isn’t simply being used when all other options to raise money are exhausted. Instead our homes, likely to be the best financial investment we have ever made, are increasingly being seen as part of our longer term financial and retirement planning, to be called upon when our incomes reduce in later life.

We found this sentiment was reflected in our most recent Equity Release Supermarket survey of 2,000 people across all age groups.

Your home is an investment

Simply put, equity release offers homeowners that are over 55 a way to financially support themselves (or their loved ones) by accessing some of the value that has built up in their homes over the years. Not something we often consider while leading our busy lives, but our home is effectively a long-term property investment.

As our survey shows, this is something that one-fifth of people in their 30s and 40s now seriously think about. In fact, they were the age groups who were most likely to consider equity release as a way to raise retirement funds in later life, nearly doubling the amount of consideration of those in their 50s and 60s. 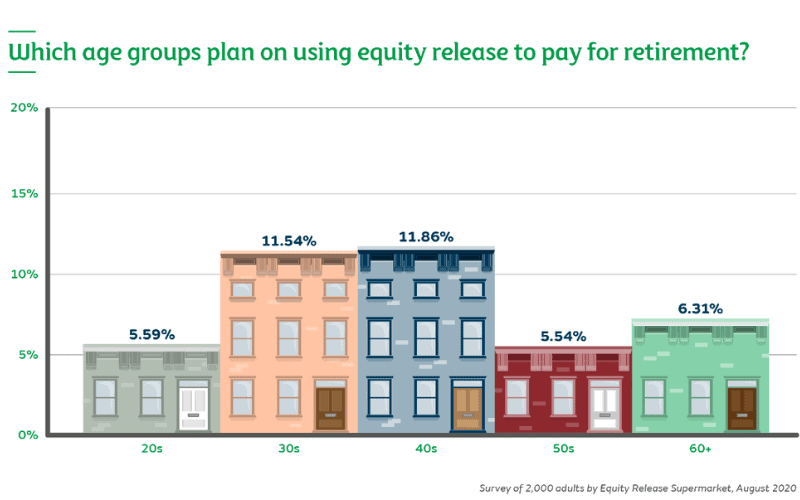 Those in their 20s, interestingly, had less confidence in their future finances than their older counterparts and were the age group most unsure about how they were going to fund their retirement years. They were also more likely to value income from another property or inheritance to see them through retirement – rather than from more traditional pensions and savings. 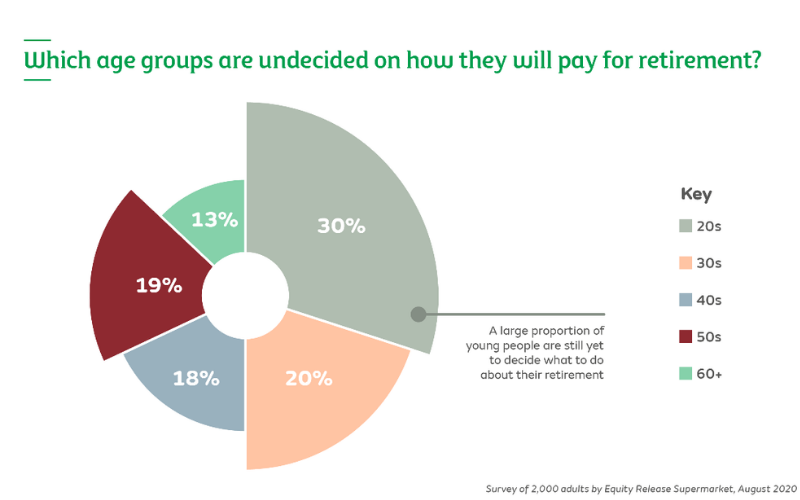 Either way, the majority of young people (70%) are seriously considering how they are going to fund their retirement, more than 40 years before they are eligible for the State Pension. The 30% of 20-somethings who are undecided on how to pay for their retirement thankfully have plenty of time to research those all-important long-term financial decisions and take action.

Another commonly held belief is that the only way to raise extra money in retirement is to sell up the family home and downsize to a smaller, cheaper property – using the funds raised as an pension supplement.

Over the last few years, the equity release industry has made huge strides forward in terms of its products being better designed to meet the needs of the contemporary retiree. From drawdown lifetime mortgages, where money can be released in a series of payments over time to suit the borrower’s needs, to voluntary repayments, allowing the adhoc repayment of some of the amount borrowed when funds allow, to fixed term early repayment charges, making it possible to repay a plan in full in the future without penalty.

We also shouldn’t forget that lifetime mortgage interest rates are at an all time low, with many plans offering rates under 3% - considerably below the average variable mortgage rate of the ‘big 6’ high street banks. 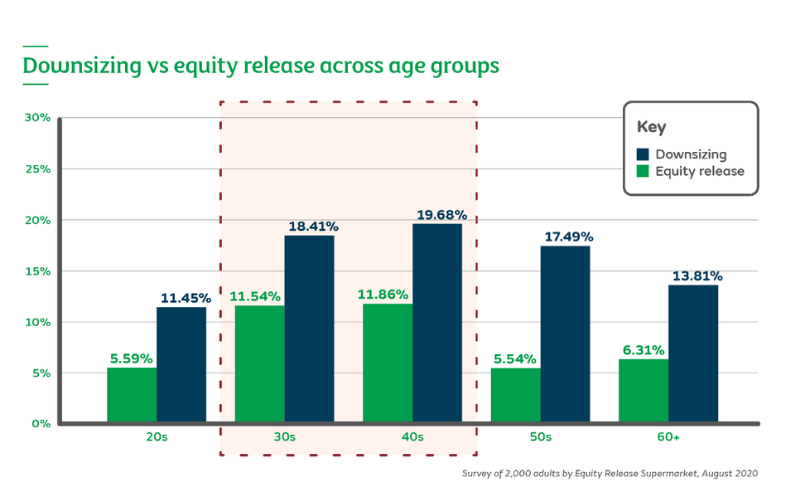 It’s no wonder then that our survery found that those in their 30’s and 40’s, the younger age groups most likely to own property, were also the most open to considering equity release as an alternative to downsizing.

Downsizing also comes with both emotional and financial costs – from leaving the family home, perhaps having to move away from social and support networks to the physical costs of moving home and any work that needs completing on the new home.

Equity release has never been a more viable form of financial support for the over-55s. After all, simply saving money is unlikely to counter the uncertainties of inflation and squeezed pension pots in the future.

Recent research from the Pensions and Lifetime Savings Association revealed that for a ‘comfortable’ retirement, an individual would need an annual income of £33,000 (or £47,500 for a couple).

With the State Pension now starting at age 66 for both men and women and it providing an income of just over £9,100 per year, there’s a big gap to fill between that and the amount needed for a ‘comfortable’ retirement.

It’s clear from our survey that younger age groups are more likely to consider using the ‘future wealth’ that is likely to build up in their properties as a means to support their retirements – through some form of later life lending.

But given the current market conditions and the fact that more retirees than ever would benefit from extra financial support now, there has never been a better time for the over 55s to consider equity release as well.

At Equity Release Supermarket, we are one of the largest later life lending specialists in the UK and we advise on not only equity release but also retirement and retirement interest-only (RIO) mortgages – providing our customers with a truly independent, whole of market offer to supplement their incomes.

For more information about using any aspect of later life lending as part of your retirement planning, simply call  the Equity Release Supermarket team on Freephone 0800 802 1051 or email us today.