Defining a nation: the bespoke bank notes of Britain’s cities

From Queen Elizabeth II’s soft smile to the steadfast stare of Winston Churchill, banknotes exemplify the pride of Britain.

Their legacies are certainly inimitable, but bespoke to British cities they are not. And this got us thinking:

We’re not talking landmarks or world leaders, authors or aristocrats. This is all about the people who showed the ‘true grit’ of their home cities; musicians who defined a generation, athletes who inspired, and actors who showed Hollywood how it’s done – these are the modern-day heroes we need on our banknotes.

So, who would feature for your city’s banknote? To get the ball rolling, we looked at some of the biggest cities in the UK: Manchester, York, Sheffield, Leeds and Glasgow.

Take a look below, to see which of your favourite stars found their way onto the humble £20 note. 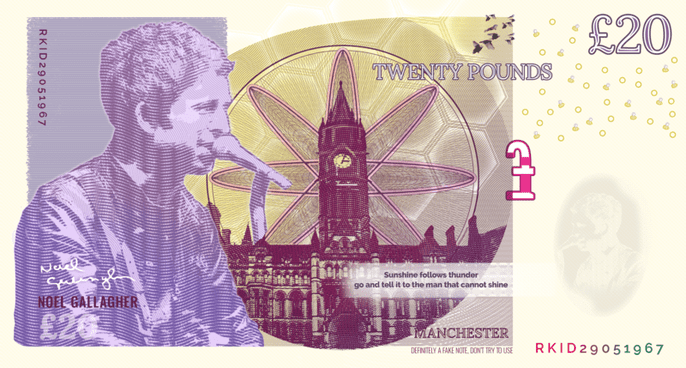 He penned the lyrics to prom dances, delivered chords for umpteen stag parties and had his words butchered by late-night karaoke singers; Noel Gallagher continues to be the man of Manchester - even 20-odd years after the Britpop buzz of Oasis.

A man with a (Manchester) bee in his bonnet, especially when it comes to his relationship with his brother, but there is no doubt that his love for the locals is a two-way affair.

His Mancunian drawl continues to entrance adoring fans with his eponymous Noel Gallagher’s High Flying Birds. Going strong since 2009, and with every studio album shooting straight to the top of the UK charts, no festival is complete without his iconic mod mop topping the bill.

A legend in Northern circles and beyond, there is no-one better to decorate the Mancunian banknote than this Gallagher brother – just don’t tell Liam. 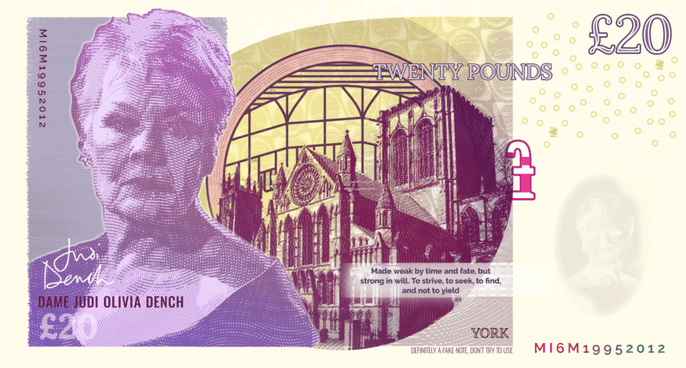 When you’re designing Great British Banknotes, it pays to have a national treasure to fit the bill(fold) - and there are few more deserving of that status than York-born Dame Judi Dench.

In a career spanning more than six decades, Dench’s resume is almost as lengthy as the number of honours she has been awarded. But no matter how many titles she acquires, she is still the inimitable “M” to many, James Bond’s stoic superior.

As well as putting her stamp on one of the biggest movie franchises in history, she has also earned herself multiple BAFTAs, Emmys, and Golden Globes. Phew! 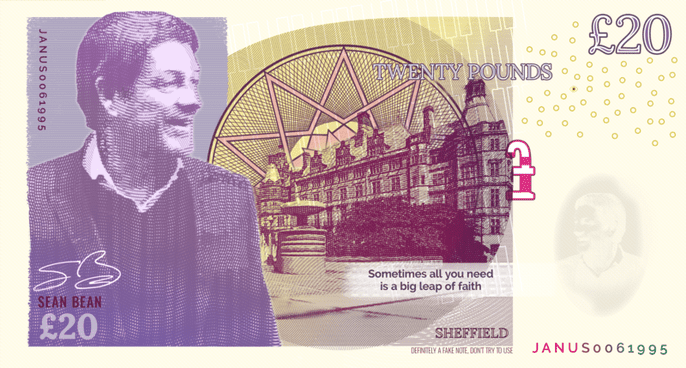 To say Sean Bean has enjoyed an illustrious career is something of an understatement. The actor has fought as Richard Sharpe in the Napoleonic Wars, braved the dangers of Middle Earth and navigated the complicated politics of King’s Landing – very often dying in the process.

However, even as he moves from one fantastical realm to the next, Bean has never forgotten his Sheffield roots. From his now-iconic Yorkshire accent to his short (and dramatic) stint on the board at Sheffield United Football Club, the actor has become synonymous with the city in which he was born.

Despite his jam-packed schedule, Bean regularly finds time to return to Sheffield and still retains a deep sentimentality for the city. As far as we are concerned, there is no better choice for the Sheffield banknote than Sean Bean. 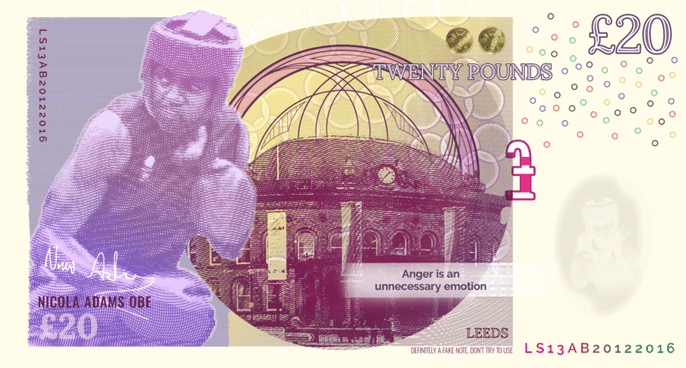 To be Great Britain’s most successful female boxer of all time takes some beating.

At the London 2012 Olympics, she wrote herself into the history books by becoming the first-ever female boxer to win a gold medal. And how do you follow that success? By winning a consecutive gold medal at Rio 2016, of course. Not only did this earn her double bragging rights, it also made Adams the first female boxer to become a double Olympic champion.

With a dazzling smile that punctuates each rhythmic Yorkshire twang, it’s impossible not to adore Adams – even if she could quite easily knock you into next Sunday.

A banknote with her award-winning grin is the least this Olympic champ deserves. 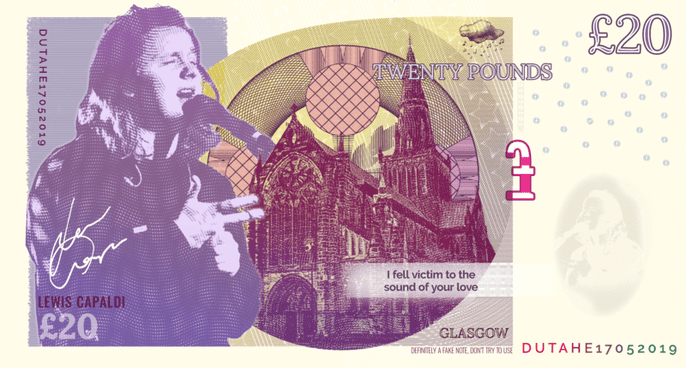 Capaldi’s self-deprecating character might have a countenance that says ‘A pint and a packet of crisps is fine’, but his sell-out shows, festival headliner slots, and chart-topping singles on both sides of the Atlantic prove he’s more than your local punter. Just look at his raw, emotional ballads - which equally break your heart and soothe it all in one – and you get a good idea of his unorthodox appeal.

On top of his chart success, Capaldi has earned tabloid applause for his quick wit and unpredictable outbursts (who would have guessed he’d start a feud with Noel Gallagher?)

Maybe it’s his upbringing in a city where grandeur rubs uncomfortably with the social DNA, or maybe he’s just poking fun at the “cookie cutter” establishment; all we know is he is a superstar with enough clout to feature on the Glasgow banknote for the next few decades. And then some.

Who do you think should appear on the banknote of your city? Tell us at Equity Release Supermarket which city you live in/come from, along with the famous face you’d choose, and we’ll look to bring your banknote to life.http://bit.ly/BritishNotes

The images contained within this page are licensed for re-use under the Creative Commons license Attribution-ShareAlike 4.0 International (CC BY-SA 4.0)